What is Multi-Channel Encoding?
Multi-channel encoding refers to the ability to serve multiple simultaneous streams from captured video sources. This is most useful for making a media source available to many destinations for immediate consumption (live streaming) and later consumption (on-demand streaming). Multi-channel encoding deals with problems such as number of simultaneous viewers, types of viewing options (hardware vs. software, wireless devices, etc.), and recording options for on-demand streaming at a later time.

While video production environment workflows often deal in uncompressed video to maintain quality throughout the editing process, most applications of multi-channel encoding deal with compressed video for facilities AV and for content distribution across multiple locations and through the public internet.

Using a multi-channel encoder
One way to generate multiple different streams is by using encoders that have the processing power and features to produce multiple streams directly from the encoder.

The benefit of using a multi-channel encoder is that less hardware is required further down the pipeline. Configuration of the desired channels can be performed and tested locally. This type of encoder will often be more sophisticated, with more features and flexibility than cheaper encoders, and is often capable of higher quality video as well.

There are many types of media servers. Some are for serving media content at home. Some are for performing transcoding operations for enterprise video distribution. Media servers are very useful to enhance the functionality of any type of encoder. However, they either require additional hardware (for on-premises media servers) or subscription to a service provider (for cloud-based servers), and sometimes both.

While streaming media servers offer flexibility (especially for cloud-based services), they cannot improve the quality of the video that they receive. As such, if option A is to use a high-quality, multi-channel encoder streaming direct, and option B is to use a low-quality single-channel encoder in conjunction with a streaming media service the cost might come out to a similar level, or even slightly cheaper for option B, but the distributed video in option A is going to be far superior.

H1632 Multichannel video encoder which is studied, developed and manufactured independently by JLONvision is a 32 channel of 1080P H.264 embedded video and audio hardware encoder. It applies H 264 encoding standard (this standard is a digital video encoding standard made out by TTU-T and ISO). With this encoding standard,H1632 Multichannel video encoder Support 16 channel HDMI and 32ch CVBS input 16ch Line in (independent) audio. It is inserted with DE-interlacing scanning algorithm, which makes video quality reach the best level. Compared with the present widely used H 264 encoding algorithm.It has the advantages of supporting international standards, high performance, flexible configuration and strong scalability. It is suitable for radio&TV operators, telecommunications operators, governments of different levels, and school etc.

H1632 Multichannel video encoder is embedded OS(embedded operating system), supports 7×24 hours non-stopping work. Its platform is based on BS configuration structure; management and configuration are done by this web-page in the long –distance without being supervised by human. 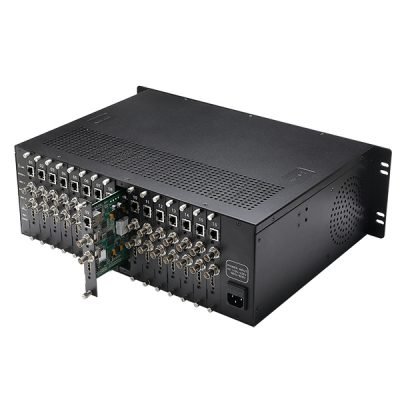 Topology diagram of the overall scheme

Generally, we accept the following payment methods: T/T / Alipay / PayPal(need 4.4% commission charge) / western union. And our protection only gives the payment ways accepted by Aliexpress platform. If you have any question about the payment, please feel free to contact us.

1. We will send the items within 2-5days (working days, Not holiday seasons)after the payment is confirmed
2. We can provide EMS, TNT, Fedex, DHL, UPS and so on. If you need the item urgently, please contact us for express shipping. We will calculate the express shipping cost for you.
3. When you receive the items you ordered, please check it carefully in 24 hours. Please contact us directly if you have any problems.
4. If you have not got it within the shipping time, please contact us without hesitation. We will check it for you with the post office and customs.

1. All products purchased from our company are guaranteed to keep in good repair for one year. If quality problems happen during the guarantee period. Our company provides remote technical with TeamViewer and accessories for free. If you are caught in some problems when using our products, welcome to contact us at any time.
2. Free software upgrade ，pls contacts us. Alter- Sales: [email protected]

There are no reviews yet.